On June 18, 2015, the STA Board of Directors approved the Interchange Justification Report (IJR) for the West Plains Transit Center after a lengthy development and review process involving a number of stakeholders and public agencies.  On July 22, 2015, the IJR report was submitted to the Washington State Department of Transportation (WSDOT) for review and concurrence.  On August 7, 2015, WSDOT approved the IJR, and on September 1, 2015, the Federal Highway Administration (FHWA) granted a Finding of Engineering and Operational Acceptability.  Final approval of the report is pending the completion of the National Environmental Policy Act (NEPA) review.

Work is complete on the conceptual design and the project has moved into the preliminary engineering phase.  The team is working on completing the NEPA environmental review process, which is anticipated to be complete in April 2016.

As part of the STA Moving Forward planning study, STA initiated a project to evaluate a transit center in the West Plains area (Exit 272) that would provide quick and safe access to I-90 both eastbound and westbound. The purpose of the transit center is to improve connectivity between cities in the West Plains area, provide transit access to residential areas to the south of I-90 , and increase productivity on routes in the area. The West Plains Transit Center is an important step in the implementation of the High Performance Transit (HPT) Network . Funding for the design of the facility is provided by a federal grant and local funds.

The West Plains Transit Center is a new transit center that will provide these benefits:

Stakeholder outreach will continue to be a major component of this project. Two groups have been formed to provide input into major decisions regarding the project as well as technical design review. A Core Stakeholder Group has been formed to provide guidance throughout the design process, focusing on major design decisions, public feedback reports and grant strategies. This group is represented by FTA, FHWA, WSDOT, Spokane County, City of Cheney, Spokane International Airport, West Plains Chamber of Commerce and Spokane Regional Transportation Council.

A Technical Committee has also been formed to provide assistance in the technical design aspects of the project, assist in the identification of design options and to review design plans, reports and studies. The committee is represented by FTA, FHWA, WSDOT, Spokane County, Spokane International Airport and Spokane Regional Transportation Council.

Meeting packets can be downloaded below under Supportive Materials.

Beginning in 2012, an extensive public outreach campaign has been underway as part of the STA Moving Forward planning process to gather public input on the planning effort. Through this planning process, the Spokane to Cheney corridor was identified as a top candidate for consideration as a future High Performance Transit (HPT) Network and an ideal location for a transit center.

In September 2012, a Corridor Advisory Panel was created to specifically evaluate the Spokane to Cheney corridor as a future HPT corridor. The panel met a number of times to define service and amenities for the corridor. The West Plains Transit Center was strongly supported by the panel as a way to connect the cities of the West Plains and serve as a park and ride for commuters in the area.

Open houses were held to present corridor recommendations and to gather feedback. On April 10, 2013 a second open house was held on the STA Moving Forward planning project again gathering public input on corridor refinement recommendations. The West Plains Transit Center was again identified as a necessary component of a successful HPT corridor.

During the Fall of 2014, STA implemented an extensive public outreach campaign for the STA Moving Forward plan. This 10-year plan, for more and better service includes the West Plains Transit Center as a major project. The outreach campaign included scientific polling, community presentations, telephone town halls, website notifications, and community open houses. In summary, over 75% of respondents support the construction of the West Plains Transit Center . The final public outreach report can be reviewed here.

In March 2015, a joint open house and traffic impact analysis public scoping meeting was held. The purpose of this meeting was to present specific information about the project and gather public input and ideas on design and amenities as well as identify any traffic concerns. Information from this meeting will be used to further define the project as we move forward through the design process.

Currently, there are no public outreach events scheduled, however once the engineering design has progressed to approximately 30% design, further outreach events will be scheduled. Check back often!

Work will continue on the engineering design for the project.  Current tasks include finalization of the park and ride site, completion of the channelization plans for the new median flyer stop and east bound off-ramp flyer stop, and completion of the NEPA review process.  The team is also working to complete needed environmental and geotechnical reports. 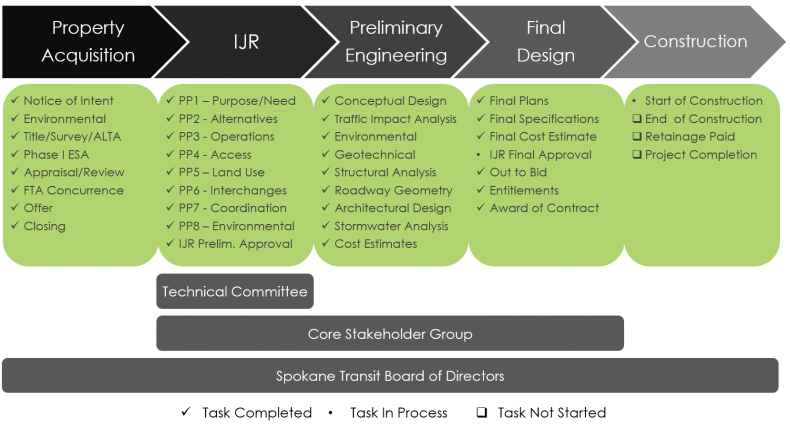